I didn’t have enough local knowledge, or at least, preferences, so I asked Martin & Peter to select a good place to hike near to York, and they chose Sutton Bank. We discovered the trail from the visitor centre led to what a few years back was voted by readers of the Dalesman as the “finest view in Yorkshire”. We were fortunate with the weather, as earlier in the week Saturday had been forecast for rain, but it never appeared. It was more often overcast than sunny, mostly in between, and the clouds were moving so fast there were a couple of occasions I saw a scene to photograph with the light playing on the land and the whole thing had disappeared before I even got the camera out.

We were curious to learn more about the Kilburn White Horse, so we hiked in that direction. That also meant passing the glider field and at one point a plane towing a glider took off directly over our heads. There is of course little to see of the horse from above, and we declined the opportunity to descend the thoughtfully supplied steps, since it would most obviously mean climbing the same, many steps. Back at the visitor centre we paused for lunch. 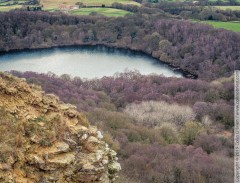 Heading back to “the view”, we hiked in the opposite direction to before, now along the Cleveland Way. For some reason, we were now much more exposed to the wind, so it was all the more amazing to some some climbers rolling up their ropes having ascended Whitestone Cliffs. This direction gave a better view of Gormire Lake, as well the outcrops of limestone.