It being Sunday, I had checked that the bus and ferry would actually be running. I hadn’t checked how often the bus was running, and so when I didn’t get moving fast enough, I found myself with an hour and half wait for the next bus. The bus itself takes quite a ride; some of the earlier scenes I recognized from when I took the train to Vancouver, and after some wandering around the countryside the final stages were through Lummi Nation land; almost an hour.

They provide a shelter for waiting for the ferry (though no restroom on the land side). I was joined by another footloose photographer, Aaron Silverberg, who turned out to be a published poet, so we had plenty to talk about; just as well, as the bus schedule is not tied to the ferry schedule. When I arrived on the island, the most striking thing was the view of the peaks of the Cascades. 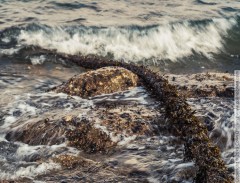 There was a wind advisory for the area, which didn’t seem relevant to the mainland, but when I got hiking on the island, it was strong enough, and cold, to seem to cut straight through me. I started with the beach, in sight of the ferry, and continued North. From what I’m told, all islands hereabout have the best scenes on the opposite side of the island from the ferry. I can’t corroborate that, and had an enjoyable hike, but the cold and the need to take care of other business back in town meant I took an early ferry and bus back.

Another place waiting for a proper visit in the future.