I’ve just spent a week at Open Studio Workshops in Mellon Charles in Wester Ross, on the coast of the Scottish Highlands, learning “The Art of the Edit”. I hope. It was certainly a great experience, great people, tutors, students and support staff.

One of the tutors was to have been Elizabeth Roberts, editor of the UK magazine Black+White Photography. While she couldn’t make the trip from London for health reasons, she nevertheless defined the week by providing a series of tasks (briefs) and offering the carrot of appearing in the magazine. I was one of the people who might more normally work in color who chose to share my photographs with the group as black and white. I can’t remember when I last seriously tried to do b&w, largely because I didn’t appreciate what I was producing, but this week my efforts were met with many positive responses.

Each day had a particular goal, end product, all under the umbrella title of A Sense of Place; 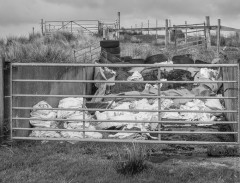 To provide material for these exercises we were to go out taking photographs each morning, and work towards the goals in the afternoon. There were a couple of beach locations to chose from on the other side of the headland, at Opinan or Mellon Udrigle. The weather produced serious contrasts. The first day had a clear blue sky with dazzling sunlight, and the rest of the week was frequent rain showers, with major gales which presented a hazard to camera equipment and photographers, such that the next couple of days were restricted to the area around the studio, in particular the beach below and the Naval Boom Defence depot down the road.

Replacing Elizabeth in leading the workshop was local/travel photographer Linda Lashford who helped with the more creative aspects, particularly when it came to the book. A comment from her at the start of our first outing gave me the idea of exploring how crofting had changed over the years from a subsistence living based around the sea as much as the land, to one where the sea for many had been replaced by catering to the needs of tourists, with sheep providing a sort of continuity through much of recent times.

Each afternoon started with an initial edit of the photographs collected and migration onto Eddie’s laptop and typically some review with him. The bulk of the time was group reviews, presenting possible selections and groupings, on the whiteboard for smaller sets and on the tables in the cafe later in the week. For the review, you had to explain the thinking behind the selections the group was looking at, and then encouraging comments from the group to lead to a final selection. It was in the first such review, listening to what other people had been seeing, that I added a layer to my “story”, of abandonment, both in terms of how older crofts had been left to reduce to ruin, but also how much “stuff” was simply left where it was last used, maybe to be picked up another day, as well as the amount of debris that washed up on the beaches.

Working with Eddie in black-and-white will I think help me a lot going forward. In making the sequences we were always conscious of how the photographs sat next to each other, how the tonal qualities might be more harmonious, how contrasting, conflicting, not-so-relevant elements could be made to fit with the whole, the main. These things were perhaps more apparent working in black-and-white, but I hope to be able to transfer back to colour. The other key learning, though still more difficult to articulate, was how photographs would sit next to each other, both in terms of how they were laid out on a magazine or blog page, but also as you turned the pages of a book.

After the workshop Eddie delivered all our work to Elizabeth and she very generously provided feedback, as well as selecting one (black-and-white) set to appear in the Salon feature in a future edition of the magazine. My friend Brian McBride, who had only signed up for the workshop the week before as a way of addressing the fact we hadn’t been able to visit with each other for over three years, was chosen for the magazine.

A workshop such as this was a useful reminder of the difference between professional photographers and the rest of us; working to a brief, properly “picturing” the story and what it needed in advance, and while out photographing, was quite demanding. When you add in all the other things we were trying to learn and deliver at the same time, it was quite an intense but very rewarding week. 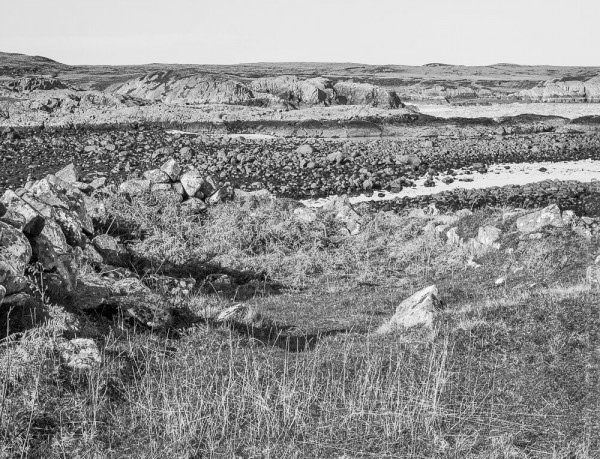