FLOW Photofest is a biennial international photography festival with exhibitions across the Scottish Highlands & Islands. 2021 is the third time it has been held, this time with the theme of “Legacy”.

That was it, they just gave that one word to guide your choice of photographs. I let this ruminate in the background for some weeks, not really getting any inspiration either way as to what it might mean for me, what photographs to select, other than they would come from one of my recent trips to Scotland.

With the submission deadline almost upon us, I sat down with my catalog and started looking through for inspiration. The organizers also asked for some text; I don’t recall what they called it, I don’t think it was artistic statement, but certainly something to help explain your selection.

I hate writing artists statements, or more specifically, I hate having to write them, as I can never think of what to say, my mind doesn’t approach photography in that way, and doubtless the perfectionist in me thinks both it can never be good enough and it can never be changed once handed over.

I sat down to write, and in one stream I produced
“Because we allowed a few people to put profit before community and co-existence, to believe nature and its inhabitants were there to be exploited instead of cherished, our legacy is no fish in the sea, no fish in the rivers, no birds in the trees, no carbon in the Flow Country.”
I was surprised by the strength of feeling in this statement, by the vehemence, but it is informed by my trips to Scotland and subsequent support for various “rewilding” efforts there, so I used it. And yes, there is a contradiction in that I flew thousands of miles on more than one occasion to make these photographs, and I don’t have an answer to that, yet.

For those who don’t know, the Flow Country, from which I believe the festival takes its name, is the north east of the very north of Scotland, and much of it is peatland, indeed is 23% of Scotland’s land area (nature.scot), is 12% of the world’s blanket blogs (nts.org.uk) and as such is a major store of carbon, much more so than trees; if only people would stop extracting it (it obviously makes great compost in your garden) or generally abusing it (in the rush to plant trees, some people started planting in peatlands) and draining it (it dries out and gets blown away).

Armed with my text, I looked again at my photographs. The photo at the top of this post made it as far as the Photofest shortlist, and as such, though it is not part of the actual, physical, exhibition, it is part of the online exhibition. It is a photo I made from the train travelling back from Wick to Inverness in 2018, part of the trip when I tried to go round Scotland just using public transport, and the “Beast from the East” tried to stop me. It took me a while, and I don’t mean while the train raced by, to understand what I was looking at in this picture, and to be honest, I still don’t know if this activity is extractive or restorative. The former is more likely, but the latter is beginning to happen. 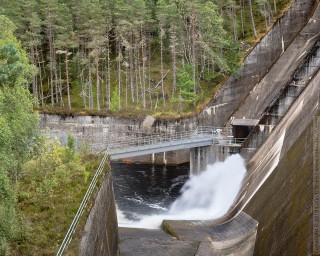 So many rivers in Scotland, and North America, now have dams, some to help manage the supply of drinking water, some to produce electricity, but so many of these have produced environments that cannot sustain the fish and other life they used to. Obviously drinking water and carbon-free electricity are “good things” but most of these dams were built (at a time) without consideration, or concern, for the impact of change on the life the river had been supporting, not least the local peoples who had built the river into a culture that had sustained them for hundreds of years.

This photo also references the “factory” tree plantations, that densely pack quick-growing spruce(?) trees that have obvious economic value, but to the detriment of native trees and plants and the wildlife that would live with them. These trees are not themselves the issue, but the close-packing and the clear-cutting, and replanting. Thanks to the work of scientists such as Suzanne Simard there is a growing recognition that even these trees would benefit from an approach that involved more selective felling and retaining some older trees to form the basis of the next cycle.

North Sea oil extraction burst into our consciousness in the mid-60s. The oil fields stretch from Norway across to Scotland and round the north of Scotland taking in the Shetlands and Orkney islands and even into the Irish Sea and Atlantic Ocean. Oil and gas extraction has declined this century, particularly in the UK which is now a net-importer of crude oil, so we might think of these oil rigs in my third photo as being idled. But about half of the reserves are still there, and there are current controversies surrounding, for example the granting of new licenses for extraction off the west of Shetland.

Unfortunately none of the statements have made it to the Photofest website, so we can only guess at the diverse interpretations of the “Legacy” theme. It’s certainly an interesting and diverse collection.