I was up bright and early, too early to even see my great AirBnB hosts to thank them, walked the half-mile to the train station. For a long time, it was just me and the train, so I selected a good seat and went outside and cleaned the window!

The trip from Wick goes first to Georgemas Junction and back up to Thurso. Oops, now we’re going to be heading the opposite way, so I abandoned my clean window before anyone got on. But then back at Georgemas Junction, the train decided to head in the original direction. The two people who had taken my original seats had barely settled and were so kind and gracious in swapping with me. Subsequent discussions revealed they were both Americans, from Washington State, one visiting her friend who was in Scotland while her husband worked on the Dounreay decommissioning. 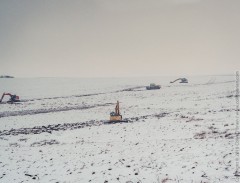 The train takes an odd route, probably reflecting when it was built, going inland a couple of times, up and down valleys, while the bus just goes straight up the coast. So that was great, seeing different landscapes. Not that you can really point to mountains in the far north east; hard to tell when covered with snow (hurray) of course, but looking like high moorland. Fascinating to see these machines digging up the moor (extracting peat I assume). 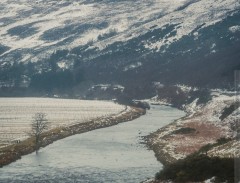 Quite a long ride through very varied terrain, from the moorland through to hillier country on the riverside detours and of course sometimes getting near the sea before getting more pastoral and then urban as we headed south and eventually arrived in Inverness.

Amazingly I could have lunch at the same, my favorite, cafe (Velocity) as I had done the previous day, before boarding the train from Inverness to Aberdeen. For some reason I had expected this to be less interesting, perhaps I imagined it more agricultural in parts and more built-up in others, but in fact it was fascinating terrain, again with plenty of variety. Worthy of a visit of its own one day.

I got off at the stop before Aberdeen itself, which is supposedly for the airport, and I had a reservation at one of the hotels there for departing the next morning; only the railway station is on one side of the airport and the terminus, along with the hotels, is on the opposite side, and the only practical way to get there is by taxi (well, it was raining at the time).