Protect endangered habitat and you protect endangered species. That was the message from David Clipner, the Wildlife Program Director at the Leslie Science & Nature Center. I was at the LSNC with other members of the Michigan Artists as David brought various birds of prey and critters (turtles and toads) out of their cages into the open for us to get a good look at; and at the same time share an enormous amount of information about each one. They’ve all suffered an accident or other past misfortune which means they are no longer able to look after themselves in the wild, so the Center provides a home and food for them in return for them participating in the Center’s educational function. This screech owl was the most relaxed bird that we saw as well as the smallest; biggest was the vulture. 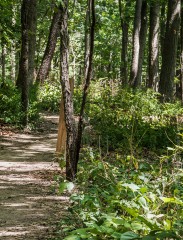 Afterwards I though it was about time I had another hike around the Black Pond Wood. It’s obviously been a while since I was last here. Before the predominate color was brown, but now it is clearly green.