I wanted to test out how feasible it was, not just to decide to have a weekend on one of the San Juan Islands, but to get there and back from Bellingham using public transport. For the most part, we can say it was easy. Depending how you get to the stop for the 80X, it was 3 or 4 buses, with the main change at Mount Vernon, to get there. The complication was coming back on a Sunday, in that there are no buses between Anacortes, where the ferry operates, and Mount Vernon, so I had to use the Airporter, which meant one less change, and this time the main one in Burlington. 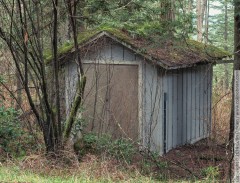 None of the hotels or B&B’s I checked out mentioned the idea of providing a ride from the ferry, so I chose Orcas Island to visit, and the Orcas Hotel which is just across the road from the ferry. This meant I was too far away from where the trails were (though unlike other islands, you could immediately be away from the village), and so after checking in at the hotel I took off along the road west hoping to reach water somewhere along the way, but at least at West Sound. I passed lots of road, lanes, tracks, and driveways, heading off to the water, but they were all very clearly marked as Private. Such a contrast to Scotland with the Right to Roam laws. Happily I did make it to West Sound just after the sun had set, and had a nice walk back in the dark. This was when you saw the advantage of getting away from the mainland; it was a clear night, the sky was inky black, and there were stars all over.

Next morning, I was out early heading east, but kept on the road again by all the Private signs, and this time I did not make it to my water goal, not wanting to leave turning back too late and risk missing the ferry and more importantly my bus. 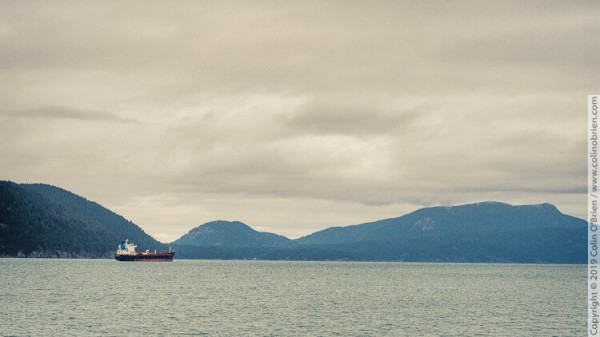 On the way to the island, and on the way back, I was out on the galley (I think that’s what they called the walkway, outside, you could access at the prow) taking photographs. From this you could see that perhaps it wasn’t so bad that you couldn’t reach the water on the island, as most of the time the land was ending in cliffs. On the boat back, I got talking with another photographer (Arndt Broecker) and swapped contact info. When I got home and looked at his photographs on Instagram, I noted they were, for the most part, interesting street scenes, and that I didn’t seem to attempt photographs like that any more. Of course, when I looked at the photographs I had taken on the trip, there was the photograph that opened this post, not that it’s as interesting as his collection.