It was -2C (29F) feels like -8C (18F) in Inverness but only a dusting of snow was visible. As we got into the hills, there was more snow. My plan was to take the first train and get out at Achnasheen, and there was snow everywhere. About an hour and a half to wander and then back to the station to wait for the next train. Good start. 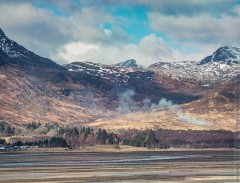 My next plan was get off at Stromeferry (they have a road sign at the main road which gives it the suffix ‘no ferry’) but the snow had retreated to the peaks long before we got to Loch Carron. Same here at Plockton, but plenty to explore I think. The wind is taking an express from Siberia and coming straight up Loch Carron, maybe not soul destroying but certainly soul sapping. At Stromeferry I hiked up from the ‘village’ to the viewpoint on the main road and back. Just a short wait for the next train along and after an even shorter trip arrived in Plockton; staying at the Inn. 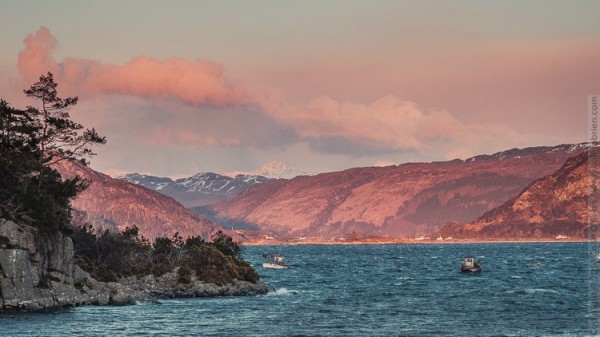 The story of this trip seems to be based too heavily around batteries. My phone charger is no longer feeling up to the job, but I found that if I hold in the usb cable, it does sort of work. Next up my camera battery charger doesn’t want to work, and again, holding the cable at just the right angle seems to get the job done, but pretty tiring.

Talking of equipment, I had planned to have my 20mm (equivalent to 30mm in 35mm terms) lens on this trip, but I was checking out an old body to sell back home and when I got to the beach in Aberdeen I realized the 20 was still there and the lens I had on this body was my 28mm. So I put it up to my eye and still went, wow this is really wide (even though on my camera of course it equates to 35mm, a length I’ve used a lot in the last 30 years or so. And I did use it on the beach.)

For the train, the 90mm is the best choice. Off the train I did use the 40mm the other day, and I did use the 135mm yesterday, but otherwise the 90 has stayed glued on. Not exactly the best conditions for changing lenses outdoors anyway.