After my original hopes to sweep through the North York Moors and Yorkshire Wolds, not necessarily in that order, and not forgetting the coast, after these hopes came to nothing, that just left the Yorkshire Dales. Alan was a hero, and did all the driving for two days, as we headed north and back in an almost steady drizzle, and was able to stop whenever I called for it.

The first day we went up to the Ribblehead Viaduct, which I had crossed years ago on the Settle to Carlisle train, but had never actually seen from the ground. Even on a wet day, or perhaps because of it, there were plenty of people around. We even saw a train go across, but I was in the middle of something else with the result I could not switch quickly enough to get a proper photograph with the train. We stopped a few times on the way up and the way back, but the viaduct was clearly the star attraction. 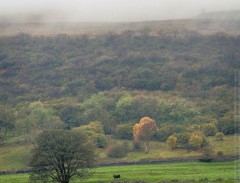 The next day was more about the River Wharfe. We went to Kettlewell for lunch and a wander round the village, and drove back down Conistone Lane on the “other” side of the river from the main road. Some interesting photos. I was actually with Alan for three days, as we had a non-photographic trip into Liverpool to the Albert Dock and the Tate (I had hoped we could meet up with a cousin, but she was out of town still). The best part of all that driving around was the opportunity it gave for lots of great conversations with my brother, something we don’t often manage living so many miles apart.