Today is a day for moving my base, from Dundonnell to Gairloch. It started out bright enough, and I had a great time climbing up alongside Ardessie Falls. It was as if the whole hillside was alive with water, with the actual occasional falls as highlights. Perhaps most amazing was the way there was a falls right by the road and the burn dipped under the road before reaching the loch. 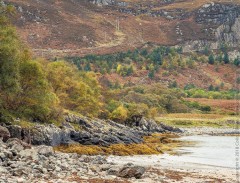 I knew Adrian Hollister was doing a workshop at Inverewe Gardens but I wanted to check out his home base for future reference, so I headed out to Mellon Charles. It started raining. When I got to The Perfume Studio, I was happy to discover that they also had a cafe, and wifi, so I settled in to catch up with email etc on my laptop. A few hours later it was still raining, so I gave up any idea of photographing out there, and headed towards Gairloch. Along the way I did pass the Gardens, so even though it was still raining, I stopped to have a quick look around, but they were already closed for the day. 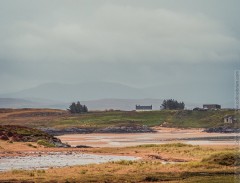 When I reached Poolewe, I took a side road without knowing where it was going and ended up at Firemore Beach. Still raining, but when you’ve driven half hour goodness knows where down a single-track road, you have to take some photos no matter what.