This was the second part of our trip to the Pacific North West.

Ahead of the eclipse, the traffic coming down I-5, particularly getting past Seattle, was just incredible; it took us over 3 hours to go from Everett to past Olympia. And there were all these signs on the highway, and warnings on the radio, about how packed the roads were (we could see that) and that if you didn’t have anywhere to stay in Oregon, then don’t bother going there.

But we did finally reach Portland and after a gap of a couple of years we were able to visit my friend Paul and his wife Lisa out on Sauvie Island. We watched the eclipse in their paddock; ‘only’ 97%, still pretty dramatic, and interesting the way the crescent of bright sun rolled around the edge of the moon, starting on the right, across the top and over to the left before the eclipse drifted away.

As the world darkened, their horses took the cue and returned to the barn; as did the swallows that live in the eaves of the barn! Only the cat ignored the whole thing. 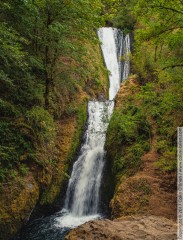 Next day we went over the other side of Portland and a ways up the Columbia Gorge. First up was the Multnomah Falls – such a major destination that, my memory of this must be wrong, it has a parking lot off the freeway as well as the local road. On the way back, we stopped for the local Bridal Veil Falls. It was interesting that both falls have two stages, with a ledge/pool in-between.

Multnomah was a mob-scene, and you had to hold your camera over your head to get a photo of the falls when anywhere near the lodge. Bridal Veil was much more relaxed, and it was possible to explore around the river as well as view the falls.