It’s a great drive north from Tarbert across the Isle of Lewis. It became an example of how you can never do enough research when I got to the standing stones at Callanish and found them surrounded by cones and tape; there was no one there at the time, but some sort of maintenance activity was ongoing, which meant the ground around the stones was unavailable for the sort of photograph I had been imagining.

On to Stornoway and ferry to Ullapool. Every CalMac facility seems to have different protocols on how you enter the line and when and to whom you show your paperwork; I certainly got it wrong here, the gatekeeper had to call me back. The ferry itself started out well, watching the Isle of Lewis disappear while accompanied by a pair of gannets.

The real excitement though was watching the coast guard helicopter team practicing landing a crew member onto the ferry to presumably airlift someone to hospital. An illustration of the value of constantly walking around the ship; if you hadn’t been in this one lounge you would never have even known it had happened. 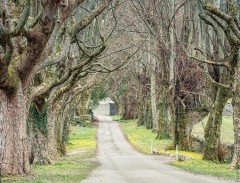 Ullapool itself proved something of a disappointment. By the time I got oriented after disembarking from the ferry, everywhere was closed. Still, I needed to find my B&B, at a farmhouse inland beyond the end of Loch Broom, at Clanach, before it got dark.

I saw these avenues of trees as I drove down from the main road, and after checking in at the B&B came out again to see what I could find. I was so fascinated by the sight that I stopped again the next morning on the way out.