I think this is the third try to take photos from the train in the UK. Previously some combination of not sitting by the window, window too dirty, train moving too fast, lack of clear views ahead, had conspired to make it a fruitless exercise. This time I was able to get into the swing of it, thanks in part to being on not so full trains, so I had enough flexibility to overcome any remaining challenges. 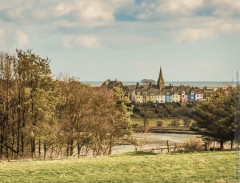 I was using a zoom lens with stabilization, so I was more easily able to react to views and get something that wasn’t too blurred. Typically the train was going faster than in the US, and I didn’t have as good previews ahead in order to anticipate composition, so I am still surprised that any look like the photographs I would have hoped for.

I had gone from Inverness to London using the sleeper, which was great, but being in the dark, the camera slept better than I did. Returning north, I wanted to see the countryside, even if I couldn’t photograph it. The first leg was from London to York, after visiting Tate Britain in London for the Hockney Exhibition (and the Turner Collection).

I was able to stay with friends overnight in York so that next day I could complete the trip to Inverness all in daylight, even though it meant changing trains twice (in Edinburgh and Perth). Different trains, and different weather, meant it was sometimes easier than others to get a good view. The most dramatic was as I was crossing the Forth, when it started raining on my side of the train, where I was in position for viewing the almost-complete new road bridge.

I have added a gallery of the more successful views. Sadly, I wasn’t able to also keep transferring GPS from my phone to the camera, so I have no idea where most of these are, so if you recognize something, please do let me know.