After all my visits to Black Pond Woods, I wanted to get back to my River Huron project – has it really been almost a year?. Originally it was about “Intersections”, so where creeks and roads, and railways, met or crossed the river; but I’m beginning to think of a narrower focus, to look at all the dams and weirs that were put onto the river to control its flow and/or harness its energy and power, which there was lots of, despite its relatively slow pace throughout its length. 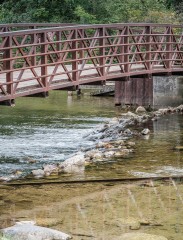 Inspired by Jerry Dennis’ book “Canoeing Michigan rivers”, I headed up to Proud Lake Recreation Area, which is part of the state park system. By default the maps app takes you to the campsite, but there is surprisingly little access to the lake never mind the river there. I was able to work out that the park headquarters was further down the road and river, so I headed there. More confusion, the best parking seems to be given over to a conference center, but I found a nice walk down to where the footpath crossed the river.

You don’t see it in the first photo, but this second one shows the weir as the Huron River leaves Lake Proud; not so much exercising control, as giving it pause for thought.