On the first day of the workshop in Connemara with David Ward we went up the Renvyle Peninsular and at one point stopped in at a beach that on first look didn’t have as much to offer as our previous stop, but on the way down from the main road we had followed a stream whose banks were just covered with these giant, rhubarb-like plants (Gunnera Manicata is actually not related to rhubarb). This photo shows some of the smaller(!) leaves there. 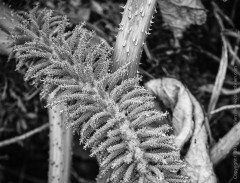 Since gunnera is not native to the British Isles, someone had evidently decided to halt its spread to the other side of the road at least, and looked like they had been spraying. The more graphic remains seemed to ask to be remembered in black and white, of which this is an example.

I have another photo showing more of the gunners plants in the Connemara 2016 gallery.