Yes, we were on a workshop in Connemara, but that’s no reason not to take in some of the biggest sights in western Ireland. The Cliffs of Moher were quite a trek from our base west of Galway, on the north side of Galway Bay. The famous cliffs themselves were not showing their best face, but even though there were plenty of other things to take photos of, when you’re there, you still have to make an effort. This photo shows a section of the cliffs, and you get a sense of their size when you realize all those dots on the top of the cliff are part of the crowds of people who are constantly visiting.

After lunch near Doolin and photos at the harbour there, we headed inland to explore some of the Burren. The limestone pavement had already been emerging at the harbour at Doolin and keeps surfacing all the way up to (and I think under) Galway Bay. There are photos from our inland stop in this Connemara 2016 gallery. After dinner in a pub (the only meal of the week not prepared by David’s partner Saskia!) we headed to where the limestone reached the Bay to catch the sunset. 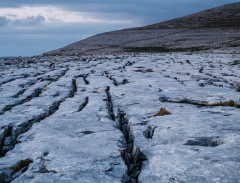 This photo is a good illustration both of the pavement itself and how the hills were built from successive layers of limestone and clay-shale. Again, this Connemara 2016 gallery has more photos from that evening.

He did a great job all week, but after this expedition we have to say a huge thank you to David Ward for all his driving; it was only a hop across the bay to the house he had rented for the workshop, but it was 2 hours! by road and it was well after midnight when got there.