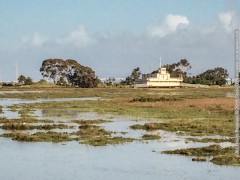 I was out cycling this morning. Nowadays, when we are in Palo Alto, I try to get out of the house and get some exercise each day, even if only a short while. My preference is for a walk with Jill, again, even if it’s only around the block, but if she’s tied up with her mom’s care, then I am more likely to take off on the old push bike we keep there, rather than a hike with the camera (there’s rarely the time). But I’m always looking for opportunities, and so while I don’t often use the camera in my phone for photography, it can be useful for these occasions.

This is particularly true if I use the Viewfinder app, as it not only enables me to remember the idea of the photograph, but also to test what is likely to be the best lens to use. Unfortunately, I can’t always take all my lenses with me when I travel, and in this shot I can see that I would actually favor another lens, which, even when I was still on the plane on the way out, I realized I had miscalculated by leaving at home. 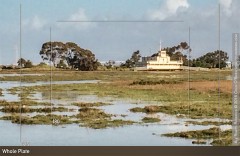 Still, now I know. Of course, the thing that caught my eye was the sun on the building, and I don’t often get out this early, but I had already been up for hours as I was watching the Liverpool game on TV, and while there was no rain, I got going.

The Viewfinder app from Dire Studio knows about all sorts of cameras, film, and sensors, ASP-C, DSLR and larger as well as lenses. You can define any number of “virtual cameras” combining sensor, your lenses and even cropping. I have two virtual cameras, one reflecting my APS-C cropped to Whole Plate (8.5×6.5), and another one cropped to 16×9. Files are still always saved in your phone’s camera’s ratio of 4×3.

You can zoom into a likely lens choice and take a photo; you choose whether the app stores one or both of what the phone screen currently shows, and/or what the resulting picture would be (I show both here). In writing this post, I’m realizing that when using the app in this way I should also pinch zoom out and make another exposure so I have a record of the scene with all lens options.

I more often use the app in realtime; that is, when deciding if I have the best lens on my camera now or if I want to change, and don’t often take any expsoures with the app.

Of course, another of the benefits of using the app as a tool for planning later visits is that it can tell you exactly where you were standing. In writing this, I have discovered that, for some reason now forgotten, I didn’t allow my camera to use my phone’s location information, so I’ll have to look at changing that.

The one thing I can think of that the app does not have, is a way to lock the view so that it can be seen upside down, as it would have been in a view camera’s groundglass. I probably won’t be the first, but I think I will suggest that to them.

It would probably be an exageration to say I bought an iPhone when this app came out, but it was certainly a tipping point, and I have never regeretted getting either the phone or the app!