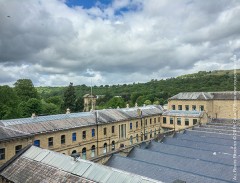 So good, we went there twice!

Saltaire is a model village (and now a UNESCO World Heritage Site) built by Sir Titus Salt on the River Aire to house his workers at his woolen textile mill, Salts Mill. When it was built in 1853 the mill was the largest industrial building in the world. Sir Titus wanted to raise his workers from the conditions of, and the commute from, nearby Bradford. It was a working mill right up until 1986, and the next year work was started to convert it to galleries, and eventually also shops, offices and light industry, by a college friend of David Hockney’s, Jonathan Silver.

As such, the vast first/ground floor of the main building, the 1853 Gallery, is all Hockney; as well as the paintings and drawings you might expect, there are examples of other projects he has been involved in such as stage sets. The next floor has a large cafe as well as various shops, most notably a fascinating kitchenware store. The top floor houses a special Hockney exhibition, another cafe and displays on the history of the mill.

Anyway, given our current interest in all things Hockney including our plan to visit the Yorkshire Wolds, plus the fact Saltaire is barely half hour drive from Alan’s house, we selected the mill for our first outing after arriving at Manchester Airport the day before. The items on display in the 1853 gallery mostly date from the 80’s and 90’s I think, and so while certainly of interest, pale in comparison with the current exhibition on the top floor. “The Arrival of Spring” is large prints of paintings Hockney made early in 2011 on his iPad, one painting a day, repeating just a few locations along a country lane, starting with snow-covered scenes and ending with flower-covered.

That was deemed a great start to our visit to England. A few days later we embarked on our own tour of Yorkshire, starting in York. When we returned to Alan’s, we were debating what to do one day. Jill had extended her stay in England and Alan’s friend had not been able to go with us on the original trip to Saltaire but had heard our enthusiastic tales, so we went again. And it was just as great as the first time, two weeks before!

The mill of course was built right next to the Leeds and Liverpool Canal as well as the River Aire and Sir Titus also provided the Roberts Park for his townsfolk; since the weather was beautiful for both our visits, we were able to stroll around and enjoy all these sights as well.