This is not the normal before and after found on a photography site. This isn’t a reference to what the camera captured and what I did to the image. Instead this is a continuation to my recent post about testing various lenses on a large chrysanthemum on our back deck. The first image is an example of what came from that first session, when the flowers were in full bloom. 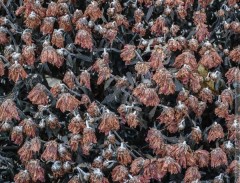 And the second is what the same lens found when I repeated the exercise after a couple of weeks of frequently below freezing temperatures. The plant is on the compost pile now, so I don’t imagine there will be another repeat. Hopefully you will agree that the latter image supports the idea of how interesting decaying vegetation can be, graphically, aesthetically.