Friday we braved the snow and headed out of Ann Arbor and were able to reach Kalamazoo for dinner, and on to the hotel in Paw Paw without incident. Next day we were braving lake-effect snow and still made it to the cafe in St. Joseph in good time. There had been a break in the snow, but when Jill’s meeting started and I headed out to the car to get my camera gear, there was a blizzard blowing (I won’t forget my rain pants next time). I headed down to the Amtrak station and had to shelter while I got the tripod and camera setup before venturing out to take a shot along the tracks. Nevertheless, I decided to go ahead with the hike out to the pier to photograph the lighthouse. When I got there, the blizzard was still blowing and the main lighthouse was dimly visible. The first part of the pier has railings around it, and the surface was slippery enough that I had no interest in venturing out further onto the narrower, unprotected stretch, though I thought I could see someone out there. 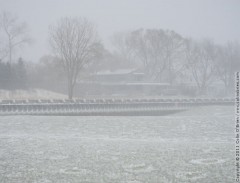 The most immediate sight was the water between the two piers, in the channel taking the St Joseph River out to Lake Michigan; it was a seething mass of ice lumps, mostly the size of a baseball or a bowling ball, with the occasional boulder-sized one. The swell rippling up the channel was visible on the pier walls opposite (I guessed something like 4 to 6 feet dips appearing), and since the wind was blowing from the lighthouse, and therefore I could only expect to get one shot, I started with the scenes close by, showing the swell and the background trees. When I turned round for the lighthouse, it was gone; you just couldn’t see it at all. Yes, I was disappointed, but I thought the sight of the water had made it a worthwhile trip anyway, and started packing up and heading back; the shape at the end of the pier had indeed proven to be another photographer and he also was heading back. 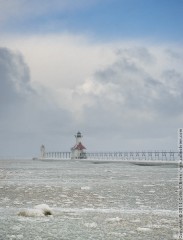 Just before I get to the end of the pier, I turned round one last time, and there was the lighthouse. Was it going to stay visible, was it going to be worth turning back, how fast would I have to work; only one way to find out, I walked as fast as I could to as far as the rails went, to get as close as possible. As I set up the camera, the lighthouse was still vague, but it didn’t disappear. The light just kept getting better, and I kept clicking away, trying every variation I could think of (shift up, shift down, lighthouse on right, lighthouse on left, vertical as well as horizontal). Eventually I had tried “everything” and the light was obviously staying; for the time being at least, the storm had passed. Now I could look around; the other photographer had gone back out to the end of the pier, so I thanked him for more compositional choices. The open lake was a larger version of the channel, with wave upon wave throwing up spray as ice lumps and water crashed into each other. This was more difficult to make a good photo, and I used the high frame-rate option to shoot bursts as co-ordinated waves made their way to shore. I’d just decided I could risk changing lens (from 85mm to 180mm) when Jill called to say her meeting was finished (and had gone well). Just time for a few more wave bursts and I could go. Even if none of the photos worked out, it had been quite an exhilarating 60 minutes.