I frequently feel that I lack the words to talk about a photograph, even to describe my photography in general. What am I taking a photo of? Well, that’s maybe the problem, I don’t really look to make photographs with an obvious subject. But something inside must be happening while I take the picture. Sure, I’m taking a picture. OK, before; something attracted me, inspired me. Well yes. Recently I seem to have been reading a lot about the idea that a photograph should tell a story. Hmmm. I’m trying to think of that one, to use that maybe as part of the selection process when reviewing photographs for inclusion in a portfolio. 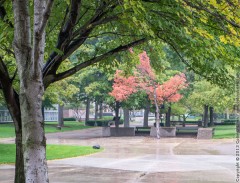 And then last Sunday I attended (with about 120 other people) a seminar at Wayne State given by Eddie Soloway and Michael Melford. This was under the heading of National Geographic Traveler magazine, but I believe they have both done features with National Geographic itself. So you would think here were photographers who knew how to use photographs to tell stories. And yet I couldn’t help feeling, as they showed great photo after great photo, that their predominate quality was that they were pretty. Have to think about this some more.