I didn’t take any photos in May, except this one day when a dog came into our yard. I was having a late breakfast, reading the news, and I looked out the window and there was this dog just sitting on the lawn. And not moving. I ran upstairs, found my camera, found a memory card, the camera had my 85mm tilt/shift lens and I would have preferred my 180mm but I didn’t know where it was and besides, the dog has probably already long gone, raced back downstairs. The dog hadn’t moved. He was looking around occasionally, like he was waiting for someone or something. Manual exposure. Manual focus. Hand-held. First photo is the result. 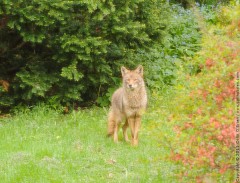 A little more time to get organized, and I rattled off a few more photos. Still not moved. The cats are out somewhere, so he obviously can’t stay. I went to the backdoor and opened it, and he retreated a little way, watching. I took a few more photos while he posed (see this crop/zoom of the third). It was only when I opened the screen door that he decided he had to go. But I didn’t know where he would go, as there is nowhere at the bottom of the yard for a big animal to get out. So I grabbed a stick and headed down to the opposite corner he had chosen. Nowhere to be seen, so I went back to the house. There was Alfie, walking along the top of the fence. Don’t know if he had seen the dog or not. Alfie came down from the fence and started exploring the yard. When he headed in the direction the dog had taken, I went down again to see if he was still around. I couldn’t see or hear anything, but just as I was about to turn back to the house, out of the corner of my eye I saw an orange streak across the lawn. Could have been the dog, but equally could have been Alfie, who was now no longer in the yard. Either way I didn’t see the dog again, and about half an hour later I spotted Bert and Alfie sitting on the chairs on the front porch. 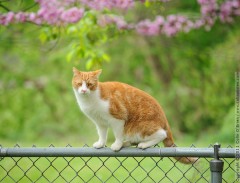 Now, I’ve never seen a coyote before, and I didn’t know there were any in the state, let alone our neighborhood. To me it looked like maybe a fox, though probably just some big dog. I had to go pick Jill up and along the way I mentioned that I had seen this dog in the yard, and I took some photos. And promptly forgot all about it. Two days later, something comes up that reminds Jill and she asks to look at the photos. They are still in the camera, but just from viewing on the LCD, she can tell it’s a coyote. And so then reading up on coyote’s, the waiting he was doing was probably for one of the cats, for lunch. Turns out coyotes are one of the more successful species in North America, thriving since the coming of the Europeans where others have (almost) failed, largely it seems thanks to its willingness to eat almost anything plus being able to reach sexual maturity within one year of birth (wolves take two). The media have been noticing this year their increasing (urban) presence. And of course, the best story has to be about the one in 2007 that wandered into a Quizno’s (sandwich shop) in the Loop in downtown Chicago (there are apparently over 2,000 coyote in the city of Chicago). This then becomes like the story of our drain backing up earlier in the spring (when everyone we mentioned it to said they regularly had their pipes cleared of any possible tree roots, but no one had ever mentioned this to us) so now when we mention coyotes almost everyone has a tale about a coyote sighting somewhere in the area in the last few years (though I don’t think anyone else had first-hand experience this time).